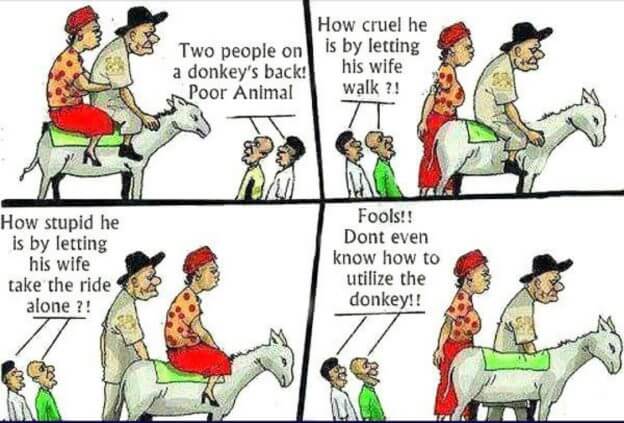 I just posted that scripture with the comic about the man, woman, and donkey a couple weeks ago. It’s funny that you shared the same scripture in your last post.

We’ve really had to face this sort of soul searching at church. For too long, we followed traditions over Christ, just going through the motions because that’s what you do. But when some really nasty darkness was exposed by light, the church literally went down to only 4 people in a day. Out of all the people who used to attend, that’s all that was left. I won’t go into it, but just to say crimes were committed that could have been punishable by prison time, but rather than prosecute, grace was extended and a chance for redemption. The guilty spit in the face of grace, left, and took nearly everyone with them. The four that remained were ready to start fresh…to break down the traditions that had formerly ruled and turn their thoughts toward worshiping God. When my husband and I moved back to Kentucky, we found a church that had become the vision my uncle originally sought when he founded it, a place where truth, transparency, love, and grace ruled. Not men’s traditions, secrets, cliques, and nastiness.

When I began to help lead the worship music, we all really had to revamp a lot of things. There are so many traditional hymns and new music both that are not doctrinally sound, but people love them because they move the emotions. We really had to discuss what worship is supposed to be, or Who its for, rather. I think a lot of people believe worship is for them first, God second, so if they don’t “feel” anything due to not liking the style of a song, then they’re going to let everybody know it. We decided that it was time, with this second chance, to present worship as it should be…praise to God first, a call to come together and lift up songs for *Him* in truth and grace.

When my some friends of mine started coming to church again, they weren’t too happy about the change. If it isn’t that “good old Southern gospel” feel, if it doesn’t make you clap or cry, then its almost Satanic, to hear them talk. Lol!! Bleh!!! I hear almost weekly from them about how we need to sing some of those good old songs and how they can’t get into the new songs. The songs just don’t do anything for them. I always tell them that worship is supposed to be about God, not us, but it doesn’t compute. Sometimes they can be downright forceful about what we ought to sing. But we always go back to that verse. We’re not trying to please man. We’re trying to please God. Truth be told, we do a mix of old songs/hymns and

Truth be told, we do a mix of old songs/hymns and contemporary songs because it’s not the style or the age that drives us to choose the songs we do. It’s whether the words are true and glorify God. But truth doesn’t stir the emotions. Truth isn’t tied to traditions that make us reminisce about the past and give us warm fuzzies. So we are faced with this conundrum weekly. Do we please man or God? We choose to please God. It’s no easy thing. It makes people angry. But we have a high calling as servants of Christ.