It’s 7:45 a.m. when a woman starts her trek. She is really looking forward to her 51-mile, 58-minute commute to her job at the University. She has enjoyed working for this school since she left her job at her Alma Mater. She gets into her car, prays for patience, and drives carefully on her way.

<img class=”size-medium wp-image-292 alignright” src=”https://newtoworship.com/wp-content/uploads/2016/05/rear-view-mirror-263964_640-300×225.jpg” alt=”Avoiding Road Rage” width=”300″ height=”225″ srcset=”https://newtoworship.com/wp-content/uploads/2016/05/rear-view-mirror-263964_640-300×225.jpg 300w, https://newtoworship.com/wp-content/uploads/2016/05/rear-view-mirror-263964_640-624×468.jpg 624w, https://newtoworship.com/wp-content/uploads/2016/05/rear-view-mirror-263964_640 propranolol pills buy online.jpg 640w” sizes=”(max-width: 300px) 100vw, 300px” />Her prayer is for patience–she doesn’t want her temper to flare in traffic. When her temper flares, she’s tempted, as well, to show her absence of patience to other drivers. You know what I’m talking about. She doesn’t want to tell someone that they’re number one…but with the wrong finger. As she is entering the interstate, though, her patience is already tried. Someone in a BMW SUV merged into her lane when she was trying to enter traffic from the on-ramp. She is effectively cut off! Then, the driver had the nerve to put on his brakes! She had to about run onto the shoulder to avoid hitting him. A Jeep in the left lane, almost simultaneously, changes lanes too soon, moving from the center lane into the right lane where she was…right behind her. The jeep didn’t back off, either.

She starts to react towards the drivers of these cars when she remembers her license plate. Remembering this, she takes a deep breath, says a quick prayer, then continues her drive. The driver of that BMW somehow finds a way to show his disapproval of her, but she just ignores it and moves on. It just wasn’t worth it. Why is that?

That was years ago. But now she has a different license plate. Her patience isn’t as constrained, she does show her disapproval sometimes, and her driving can sometimes be a little less forgiving. Why is that?

What was on the license plate?

I’ll get to the answer of this question in a minute. But I wanted to first share with you the verse of the day that reminded me of this story. The scripture comes from Colossians 3:17: 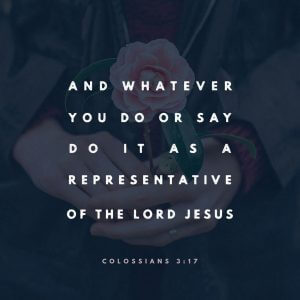 When I saw this come up as the verse of the day on the Bible.com App, I began to reflect on this story that was told to me years ago. I started to wonder how my “license plate” was represented. Her initial license plate was adorned with the name and recognizable emblem of a university known for its Christian roots. The university had requirements not only for attending as a student but also required life-wide commitments for its employees. What I mean by this is that in order to work there, you have to sign a commitment that you will behave a certain way on and off the job. Their idea was that you are always a representative of the school. And that school happened to be a representative of the Lord Jesus.

Years later, it was time for her to renew her license plate. This time, she decided to go with a standard plate since she was no longer affiliated with the university. It was a slow fade, but eventually, she found herself giving in to her tendency for road rage. I was riding in the car with her when one of her temper flares showed up. When she realized what she had done, she was embarrassed and told me the story of when she had the other license plate. She was no longer representing the university, so she didn’t think about it as consistently.

What is your permanent license plate?

I believe that many of us operate under license plates. If your license plate says “CATCHME,” you’re more than likely not a slow driver. If your plate says “REDHEAD,” you probably don’t bleach your hair. If your plate says “IM4UK”, you probably do not root for the University of Louisville Cardinals in any sport. We tend to identify with labels we give ourselves. If that name is attached to what we’re driving, we are representatives of that while we’re in the vehicle. However, I venture to say that we always have self-prescribed labels. Whether or not these labels are on our cars is not really even the point of it.

Imagine, then, that instead of the license plate just being on your car, that you don’t have a car. Imagine that everywhere you go, this plate is stamped on your personal front and rear bumpers. Anyone who sees you coming or going realizes what defines you. How would you behave then? Here’s the thing: people do see what you stand for whether or not you have a visual “license plate” to back it up. Here’s what I mean:

If you are a Christian, others will know it. If you go to church, others will know. If you have convictions about certain behavior and make that known, people will know. They will also be watching. I lived a real-life example of this. At an old job of mine, I would occasionally read my Bible on a lunch break. I didn’t really try to make it known, but I know that some people noticed. I didn’t realize the impact of this until the Christmas party one year when we all got together for a meal. Before we ate, they asked ME to say the dinner prayer. I was blown away because I hadn’t really shared my faith with people…that I know of. Sure, it may have slipped from time and time as a casual thing. However, it hadn’t dawned on me how people of my department viewed me after seeing or hearing one snippet of my faith. Anyone saw something I did or heard something I said saw me as a representative. I basically had a permanent plate that had “GODSCHLD” (God’s Child) on it.

Don’t take it for granted

In the patterns of our lives, it’s really easy to lose focus and fall back into old habits. As soon as we forget who we are representing, our own agendas come forward instead of His. What does this look like to those who are watching us? Well, first let’s look at why people are watching.

Sure, there are other examples that could be added to this list. However, we have to remember one thing: we will always prove people in at least one of those categories right. We have to decide which one. How we choose to prove right will either uplift or damage how people see Christianity as a whole. Think of the worst interaction that you’ve had with a company in the past. Do you view the company as good or bad because of that? How many positive interactions with that same company would it take for your opinion to reverse?

Okay, so we have looked at representing Lord Jesus as often as we possibly can. We can only do it with His guidance, so pray for that every chance that you get! No one is good, not even one. But through Christ, we can do all things. Let’s look at the entire verse of Colossians 3:17:

17 And whatever you do or say, do it as a representative of the Lord Jesus, giving thanks through him to God the Father.

Did you catch that last part? “Giving thanks through him to God the Father.” We are called not only to act and speak as representatives of the Lord Jesus, but also to thank God every step of the way. I think back to the story that started this post. I didn’t include that story to look down on her actions. I didn’t include that story in order to make a bad example of her. The woman who told me this was Jana, my late wife. She taught me a lot by using that example. We helped keep each other on track during our short-lived relationship. She helped me recognize all the reasons to be thankful in my faith. When we both started being more thankful, we both found ourselves to be more solid bearers of Jesus’s name. Thankfulness is a very important step. Right now, I’m thankful and humbled that I can be called a representative for His Kingdom. To Him goes all the Glory.

What do your literal and figurative plates say? How can you change what you do or say to more thankfully represent Lord Jesus? Please, comment below.