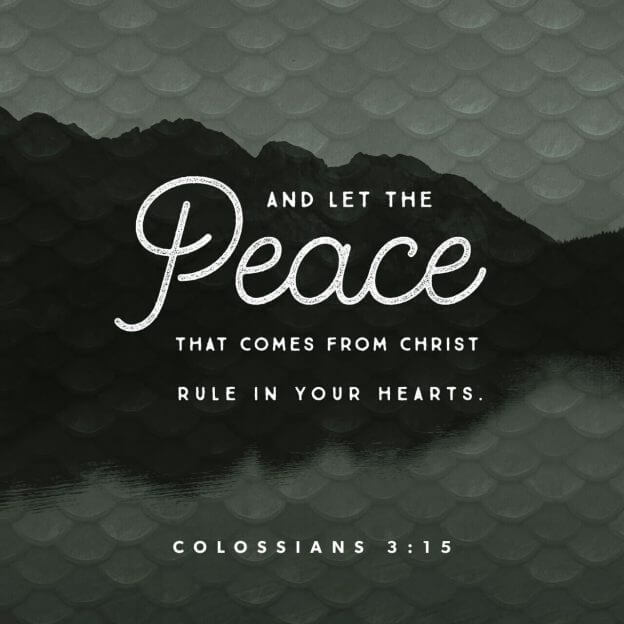 Peace because of a Piece

At first, you may think I mean a “piece” of Jesus. Well, that’s true, too. But, what Colossians 3:15 talks about is the Peace of Jesus. Whenever I hear the word “peace”, I immediately think about one of the first verses I ever memorized: Philippians 4:6-7:

Do not be anxious about anything, but in everything, by prayer and petition, with thanksgiving, present your requests to God. And the peace of God, which transcends all understanding, will guard your hearts and your minds in Christ Jesus.

I first felt this peace when I finally saw the beautiful core of the relationship with Jesus. I first viewed church as rules, wrath, and judgement. However, at my initial point of peace, I saw THE church as a living, loving, peaceful body of Christ. I know it sounds cliche, but the veil was removed from my eyes. Or, rather, the veil was torn–and I now knew what it all meant.

My life was changed. I now prayed constantly for everything. I was calm, cool, and collected. This change also happened in the midst of my police officer service. I became a police officer that made sure the people I arrested weren’t thirsty. While someone who committed a crime was in the back seat, I would talk to them. I would ask them where they were from, what kind of music they liked to listen to, or whatever seemed relevant at the time. Previously, I looked at criminals as all evil. After this peace came, I looked at the same people as “people who committed crimes,” and not “criminals.” I learned to love the person but hate the crime. Can you separate the two?

Your changed life? Or is it bigger than that?

I know that this doesn’t happen to everyone the same way. I’m not a saint or better than anyone, but I know that this can be the way the peace of Christ affects your life as well. But, let’s look a little deeper.

The words in the picture above only say part of the verse, though. The entire verse is:

15 And let the peace that comes from Christ rule in your hearts. For as members of one body you are called to live in peace. And always be thankful.

That makes things a little less personal and more global. Of course, peace in our individual hearts helps make this grand picture more possible. The grand picture of this verse actually starts before it. Just two verses prior, Paul is talking about love, unity, and forgiveness within the Body of Christ:

12 Therefore, as God’s chosen people, holy and dearly loved, clothe yourselves with compassion, kindness, humility, gentleness and patience. 13 Bear with each other and forgive one another if any of you has a grievance against someone. Forgive as the Lord forgave you.14 And over all these virtues put on love, which binds them all together in perfect unity. –source Biblegateway.com

These days, media is all over the negative confrontations involving police officers. I had one of those myself, but it was completely isolated. Most of the police officers that I worked with were not violent people, but sometimes the job called for it. My example concerns a misguided young man who tried to flee arrest, then started to fight against us.

The senior officer on the shift and I met this young man in the library when a staff person reported him as being suspicious. We showed up just to find out who he was and what he was doing. If he had legitimate business there, we would turn him loose and be on our way. It’s not a big deal, so we didn’t approach him as such. Many times, people report “suspicious people” that aren’t suspicious at all.

After we asked for identification, he ran! He just ran as fast as he could away. My thought, “suspicion confirmed.” But why? We finally caught him in the men’s restroom of a building where he locked himself in a stall. We finally got him out of the stall. He seemed like he was going to come peacefully…but everything changed in an instant. In an effort to allow him to push me over, I put gentle pressure on him in the opposite direction…however, he tripped over the door or something and went full-speed into the wall. That took the fight out of him, but it left a great wound on his head. Of course, as I’m walking him out in handcuffs, he had a gash on his head. What do you think people thought of me as a police officer? Do you think they thought I was fair? Do you think they thought I was abusing a guy while he was in his handcuffs?

I know now that it doesn’t matter. It was one little thing that disrupted my peace, though. I felt the eyes staring me down, thinking unjust thoughts. I felt like I injured this creation of God because I didn’t know how fast he would travel forward. Even then, I was able to pray and pull it back together. Even after that, I was able to (thank God) talk to him like a civil human being and get his wound seen to. I don’t understand how I could flip so fast back to loving him as a human after he fled and tried to fight me. But it’s because of Colossians 3:15 that I was able to. I think I would even call him to see how he was doing if I had his number.